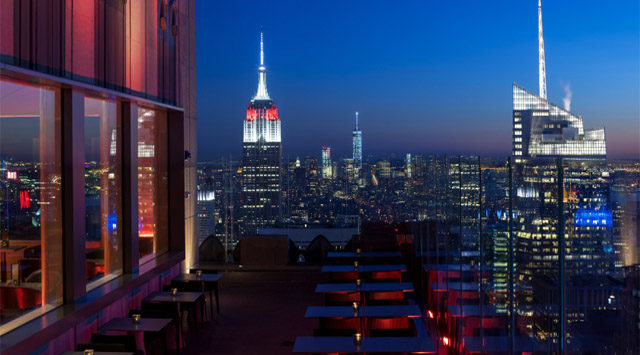 Went to the Rainbow Room at Rockefeller Center last night (that’s the entrance, beyond the skating rink) for a fancy dinner with 400 or so of my former law firm partners. It was and is such a terrific firm… brilliant people, alarmingly hard-working but with a tradition of civility that seems to last.
Pretty good place to have spent one’s professional life.

There were a bunch who had worked for me at one time or another. Two women separately said I was the first person they’d worked for. They remembered their cases in depth… said they were real fun. Most of my cases were fun. Someone once complained that I “got all the fun cases.” A pal of mine answered, “Yes, but they’re only fun once he gets them.”
Shameful of me to repeat that but i love it True. too, by heaven. The trick is to make your life a fun case. Serious business, but fun. Still true.

There were a number of people I’d been close to, most retired now. Some had done a brilliant job in their Third Act: One is a startlingly good, very “modern” painter…this very staid and WASPy corporate lawyer and now he’s just on fire as a painter. Raw, powerful stuff. How I admire that. One is a serious academic. Others are doing good works of various kinds. But a bunch have not made a meal of it. One, I heard, went bankrupt.
That, I should think, would be almost impossible for a “graduate” of this firm, but he managed it. Years ago, a handsome and able guy who had been on the Law Review with me at U.Va. wound up on the streets.
Poor man just went gaga. Life is tricky, all the way out. Keeps it interesting.

A gratifying number of younger partners came up to say how deep they were into Younger Next Year; gotta love that. Almost a celebrity. Love that, too.
In the Third Act sweepstakes, I think I win, although that painter is awfully good. One of the blessings of old age is that you don’t have to worry *too* much about where you rank any more. You can stew about other stuff…like, you know, your immortal soul. Things like that.

I like to boast that I was that comparative rarity, a Happy Lawyer. I was. I almost never go back to the firm, although it is wonderfully welcoming and gives me a “piece” of a secretary and so on. But I am deeply proud to have been part of such an attractive gang for so long. And to have occasional access to some people of whom I was awfully fond.
Nice night.