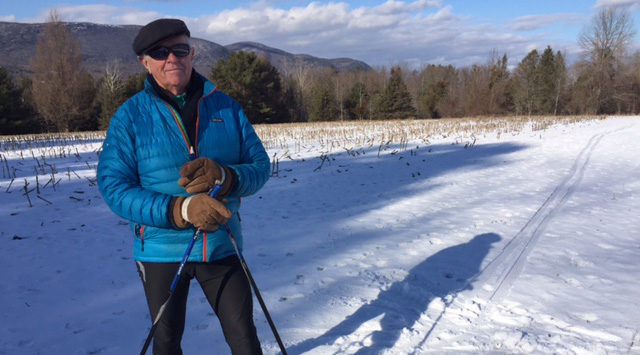 So, I’m sitting at the slightly messy dining room table, having breakfast alone in this lovely old house in the Berkshires, on New Year’s Morning. Yesterday, it snowed again – the fields are six inches deep – but this morning, sun is pouring in the floor-to-ceiling windows. There is a fire in the living room, and I’ll go there soon, but not quite yet. The dishes and the dozens of pots and pans and serving platters have all been done – amazingly – and we are mostly cleaned up. But there are still a few streamers hanging from the chandelier. And the lights are still on, on the big Christmas tree from last night. There are pine swags hanging all over the place. It was the rule in my family that the Christmas tree had to come down on New Year’s day, without fail. But I absolutely love this particular tree, so the hell with it. We had gotten a smaller one which “made more sense.” But I couldn’t stand it and went out and got a giant, which almost fit through the door. And a crèche and so on. We keep saying we are “not going to do Christmas this year,” because there are just the two of us and Olive. No Christmas for Olive? And our pals? And me? Fat chance.

It has been a wonderful Christmas season and I sit here, alone – Hilary and our guests are still asleep – and think how lucky we are. Like the sappiest Christmas card ever. But it’s true. Putting politics aside (and people like us have to do that this year), it has been just heaven.

That’s a problem, actually. I worry that a guy who sits down and tells you what a hell of a year he’s had – or weekend or whatever – runs the risk of sounding as if he’s telling you what a hell of a guy he is. Think of those endless Christmas cards/letters where you read that all four of the sender’s kids got into Princeton this year, and the Pope himself came to take a peek at his amazing grandson. Spare me! And I apologize, too. But consider this, from Jim Salter: “Everything is a dream, and only those things preserved in writing have any possibility of being real.” That is true. And I want the stuff in this little note to be real, because it was a sweet time. And I’m grateful. And you have to be able to talk about things like this or life slips away. Which is much worse than sounding like a dope.

This house was built for Christmas (in 1859) and we have lived up to its promise. On the 23rd, we had a caroling party for 70, which was just about the right number. Printed music. (No piano but there are several strong singers to lead the way.) Tons of finger food, egg nog and all kinds of wine and such. Booze to get some past their shyness. It has become something of a local event, and this one was the best yet. People are always surprised to discover how much they love to sing but they do. The whole thing felt wonderful. And I – who do like to sing and to entertain – was floating. That was partly the egg nog, which I had spent more time on this year. Such a good idea to have decent egg nog. And Cosmos and wine and Martini’s and like that. I do like mixing drinks, too, and have a tiny flair for it.

One of my oldest and best-loved friends and his wife drove two hours (each way) to be here, unannounced. That was a pleasure. And at one point he and I stepped off to one side and said – very shyly and very uncharacteristically – that we loved each other. Wow! Does that count as a limbic wonder? Well, yes, Yes it does. It was the wonder of Christmas Present.
.

The next morning Hilly and I – just the least bit ragged – drove into New York and took off for San Francisco to spend Christmas with our daughter and her family. Hideous, long flight but so worth it. My daughter Ranie – the Great Channel Swimmer – is the best mother in the world and her two girls (25 and 23) show it. It does not hurt that their father is besotted with them too, as are Hilary and I. My much-loved former wife, Joan, joined us for part of the time, along with my step-son Brian and his wife; I am told it is a miracle but Hilary and I are almost equally fond of her. (I wish they’d all just come and live with us. Might lead to murder in a month or so but I’d chance it.) We went one night to a Vietnamese/French restaurant (not fancy) which Joan knew about. Heaven and so different. Helped by a bottle of Joan’s own “Crowley Vineyard” wine…the best wine most of us will ever drink. Three days out there and then home again. The travel was a torture but the trip absolutely made the season. When we finally got home, our beloved friend from Aspen, Melissa Coleman (a wonderful author who now lives in Maine) had already arrived with her spectacular twin girls, aged 12 and 12 (they’re twins, you dope!). If we had gone out and rented perfect guests to round out the season, we couldn’t have done better. I wish they’d move in, too. Then, by heaven, our lives would begin to have some limbic heft. How we miss Walter Robinson, the Boston Homicide cop who lived with us for a while. And Harry. And Sarah and Bill. We do like to have a house guest or two.

We were all supposed to go out for New Year’s Eve but our host pulled up lame at the last minute. Hilly and I quickly pulled together a dinner party at our house for fourteen – gathering some of our pal’s guests and adding our own. By sheer luck, it turned out to be a near-perfect guest list. Nice meal too: salmon, fingerling potatoes with chives and hericots vert (cooking green beans correctly is tricky and important business; these were merely perfect, a fact which only I noticed. Odd.) Good salad, too. For once, the salmon came out right (always a crap shoot with me) and desert (brought by a friend) was heaven. But mostly it was the guest list, as always. I am not nuts about New Year’s Eve, but, for some reason, this was the best party of the year.

Not everyone stayed til twelve and I walked ‘em out, in ones and twos, into the cold, icy night. It is my invariable custom to walk every guest out to their cars and wave them down the long driveway. Dunno why but it is. And tonight I have my huge, funky raccoon coat to make it bearable. I am not father Christmas out there, but close enough.

At the dinner table we talked about each person’s predictions for the coming year. For a room of mostly-Democrats, we were surprisingly cheerful and optimistic. They were a smart bunch, too, so it was interesting…got you thinking. About the new year and about yourself. Nice stuff. Awfully nice people, which, again, is what it was all about.

The one thing we did not do last night was count our blessings. So here I sit, at the empty, slightly messed up dining-room table, drinking coffee and thinking silently about that for a moment. I won’t bore you with the whole list but here are a few items: First the usual. I am wildly blessed with a wife whom I adore and who, beyond all hope, adores me. Go figure. Then there is a surprisingly wide and loving circle of friends, family and colleagues – only about half of whom are dead which is pretty good. My three children and six grandchildren are an unmixed joy, all year round. And we are close, despite cruel geography.

Then, boringly, I have to mention health, energy and fitness. This stuff that we peddle – Harry Lodge, Bill Fabrocini, Jen Sacheck and I – it does work like a charm, and I owe it to “The Brand” to mention it. I am in near perfect health, despite being shamefully old and self-indulgent…a little fat, to be sure, but in awfully good health. No heart disease, no cancer, no falls. No nothing, really. And (this isn’t boasting, it’s advertising) I have more energy and raw enthusiasm – and do more stuff – than most of the people in the room (all of them younger). I went cross-country skiing today and each of the last four days in cold, dreadful, weather, and I was absolutely grinning with pleasure, much of the time. Soon we’re off to Cuba, for ten days. Then to Aspen to give talks and ski. Other than that the next year is packed with plans and pals and tasks that I cherish. New books in particular. Melissa has been helping me with the endless novel. I SO hope that gets out this year. And I am hard at work with Aspen pal, Jeremy James, on a new Back Pain book. Major task, major fun…maybe a major help to a few million sufferers. On a different note, we are learning to be a little more careful this year. As Billy Fab wisely says, the margin for error shrinks with age, no matter how much you work out and all. Nothing like the way it shrinks for those who do not work out, but some. So we give ourselves a little more room. No more red-eyes from the Coast. No skiing Highlands Bowl. And more time just lolling over breakfast and The Times in the morning…stuff like that.

Will all this magic go to hell at some point? You bet. There is death, after all. But not in 2016. And not in 2017, is my guess. And maybe not for quite a while after that. Mother was 89, her brother was 96 and my beloved mentor, Hazard Gillespie, was 100. Not sure he counts but maybe. Maybe a gene or two hopped the wall during our long years together. In any event, remember the sacred example of Wylie E. Coyote: head for the waterfall at a hundred miles an hour. Do not listen to the roar of the cataract, listen to the roar of your own fine engine and your love and your ambition and your hope. And, you know, go for it. Oh…and don’t look down.