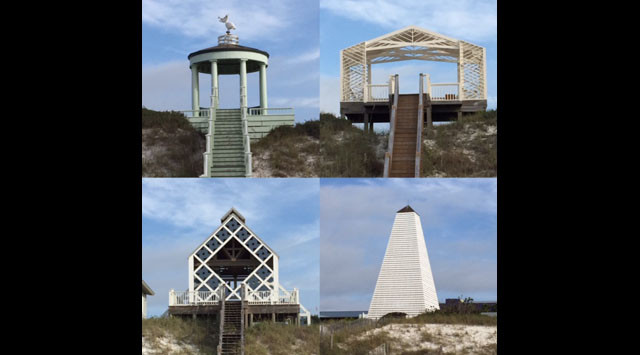 Hilly and I live blessedly various lives. This weekend, for example, we spent three days in a town, Seaside in the Florida Panhandle, which I had never heard of and which may be the most interesting and important small town in America, the center and inspiration for a real revolution in urban planning and living.  Remarkably, Seaside is the hot center of what is called “The New Urbanism.” It is a small town but a vibrant and life-enhancing center for the revolt against the sterility of modern suburban models. “Tract life” – in sharp contrast to the New Urbanism – means grim rows of suburban residences, entirely cut off from civic centers, shopping and cultural life. All of which can only be reached by car… and most of which are armored in endless parking lots and super highways. The New Urbanism jumbles them all together in what looks like (but is not) an accidental hodgepodge of residences, civic buildings and shops. Communities where you can mostly walk everywhere and where coffee in the morning or a drink at the end of the day are a chance to watch the floating opera of everyday life parading before you. Think Greenwich Village, Paris, New England villages built around “commons” and the hill towns of Tuscany. This place is cozy, intellectual, alive. And people flock to be here. I had never heard of it before, but I seem to be the only one. Everyone from architect Robert A.M. Stern to the Prince of Wales rhapsodizes about it.

The town was created, from scratch, by Robert and Daryl Davis, who acquired a desolate tract on the Gulf of Mexico over thirty years ago and went to work, with some of the best urban designers of the age. In the early days, you could pick up a lot near the beautiful beach for $40,000 and build a small house for $80,000 more. It is a slightly troubling measure of the success of the project that today that same house is worth, say, $2 million.  The quality of life draws people from all over the world and the prices are like Aspen, not the nearby Redneck Riviera. This single town has spawned 600 “new urban” towns in the U.S. and around the world, a true revolution in city planning and living.

Now Robert and Daryl want to add a new dimension. They talk about “Aging In Place”… which may shift to my notion…“Aging In Motion”. They want to make their magical town a focus for the new fitness, health and being younger in all the key ways. My talk was the “kickoff” event, and it looks as if there will be a lot of others. Hope so, and we hope that we are part of it, because this place is special. And Robert and Daryl – and board President and retired neuro-surgeon Beverly Walters – are in the Revolution business. They just might  make it happen.