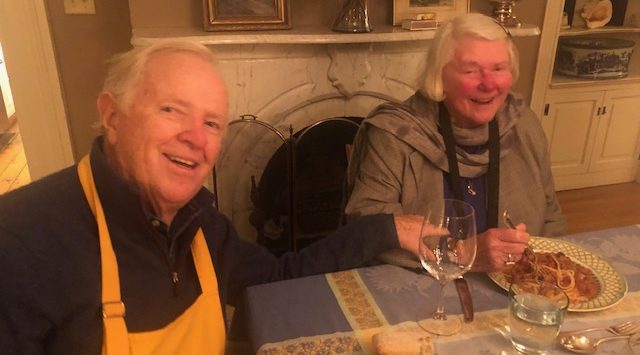 My sister Petie has been with us for a week, and it has been a joy. She likes to say that she my baby sister, which is true in a way. But she is 8 ½ years older than I at 94 (in a couple of days) and the only one of the three sisters who is still alive. They were all good looking, but she was the beauty when she was young. She is still wonderfully attractive – her face anyhow – but she’s not in amazing shape. I never got her into the Younger Next Year stuff, and now she’s paying up. Bum knee, bum heart, over-weight and so on. But her mind is just lovely, and her life-view couldn’t be better. Optimistic, interested, and smart…despite some pain, deafness, and so on. In the face of all that, she cheerfully promises to live to be 103, and insists that I keep her company. I tell her I’ll give it a hell of a shot and remind her that I give a mean eulogy. Doing that for Petie? A great “kedge.” We’ll see.

When Mother, Pa and my Aunt Kitty brought me home from Salem Hospital, in September of 1934, the girls (8, 10 and 12) were all waiting in “the telephone room,” by the front door. Petie, the most excited, was hanging upside down from a water pipe; everyone remembers that. All three were delighted, with the partial exception of the middle sister, Kitty. She had been told that Mother was having a pony, and felt a bit let down. Can’t blame her for that, but I think it has always stood between us. Odd but true. Petie and I, on the other hand, took to each other at once and have been super-close ever since. And we have made each other laugh ever since I could talk. That’s our great bond: she gets the subtle nuance … picks up on stuff others miss. And, of course, she is enormously loving; adoring, not to put too fine a point on it. At least toward me. It’s a different world when there’s someone like that from the beginning.

Last night Hilly and I had a pre-birthday party, showing her off to a dozen pals and one enormous dog (a Great Pyrenees…see pix, especially the one with OIive who turns 14 this week). Some she had met before, some not, but she was warm, curious about all of them and very much the star. At the end, as I was walking people out to their cars, each one of them went on about what wonderful company she was.  True.

I often talk about how lucky I’ve been in this life. In nothing have I been luckier than being born into a warm and devoted family. And none of them warmer – or more devoted to me in particular – than Petie. Lucky, man. Very, very lucky.