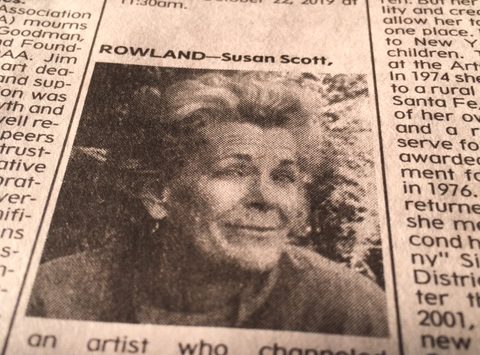 One of the weird things about getting a teeny bit older is that I find myself skimming the Obits in The Times. A little creepy but, these days, it’s a way of keeping up with my friends.
This morning it was a particular shock. You can’t tell from the pic but Susan – whom I knew slightly for a long time – was the soul of life, energy, beauty…whatever.  And now she’s simply gone.
Good grief!
I saw her “across a crowded room” in the late 1960’s and she blew my socks off. I was too shy (if you can believe it) that night, because she was so out of my league. Then I get it together and tried to get in touch, and finally did, but no luck.  She really was out of my league. Pity. After that I’d see her around town (she married a federal judge before whom I had a trial and we had friends in common).
There’s more, but her right to privacy draws a curtain. OK, this one, short story: in my efforts to get in touch with her I got a name from our hostess at that party, called and made a date. Turns out it was her birthday but she was free. Huh! That was odd. I made elaborate and careful plans, including buying a bunch of very cheap “birthday presents” and wrapping them in newspaper. Clever chap…Oh, boy. This is going to be great.
But when I got to her door (nice apartment, by the way; she was the daughter of famous literary folks), it was the wrong girl. Really the wrong girl. Long night, man. Very long night.
When I finally got hold of the real Susan, that was a long night, too. But only because she was so utterly un-amused by me. Pity, as I say. There’s more but that’s all you get.
The modest point, if any, is that death creeps up and smacks people whom it should have no business approaching. People who are out of death’s league. And it shocks us every time. Second modest point: if there’s stuff you want to do in this life, DO IT NOW. I think Susan mostly did. CC