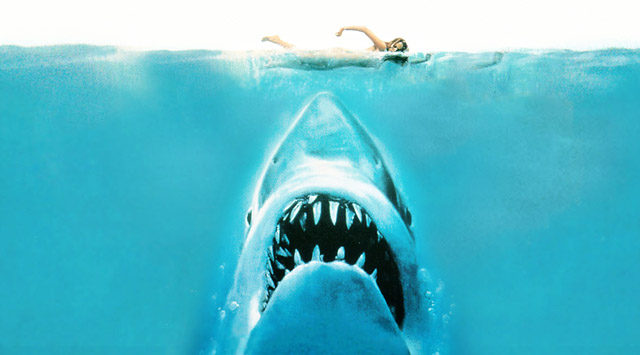 Just talked to beloved daughter Ranie about her aborted effort to swim the 28.5 mile Molokai Channel. Turns out she was having a very good swim (straight and pretty fast) in very tough conditions. There was a five foot swell, topped with five foot, wind-driven waves, so she was actually swimming in ten foot waves. And they were coming from the side which means she was sea-sick almost from the get-go. That is a regular feature of these nutty swims, but this was much worse than usual.

She was on track to do the whole swim in 18 hours which was much better than the 21-22 hours which she had planned on. But then larger forces took charge.
She was accompanied by a fair sized motor boat and a kayak. The people in the boat suddenly but calmly said, “Don’t freak, but there is a shark in the water. A Tiger Shark, in fact. We’ll try to scare him off.” Which they did by driving at him, but it didn’t work. Besides, there were not one but TWO Tiger Sharks. They were both over ten feet long. And two is much more than twice as bad as one: with two they behave differently and are much more aggressive. And they were circling her, very, very interested.

There was a minute or two of indecision but then one of them swam right underneath Ranie. So close she wondered whether she should kick out at him. She did not, which apparently is just as well. At that point she started to think what it would be like for her beloved girls and Jorge if she were, you know, “Eaten by sharks.” She thought that one over for a moment and signaled to the boat to pick her up.

The boat people were hugely relieved, said it was clearly the right thing to do, even though it’s hard to climb out when you’ve been training for so long and all. Ranie said she did not have a whisper of regret. I could tell on the phone that she meant it… was not put down by it at all. Well, she shouldn’t have been. She did SO exactly the right thing.

It was only 8 in the morning out there when she called (we had left messages in the night). I suggested she wait until 10 and then go get a drink with a paper umbrella in it. Maybe seven of ’em. She is not the type but she said she just might.

Awfully proud of her. Such a great endurance athlete. But with decent judgement too. Not bad.