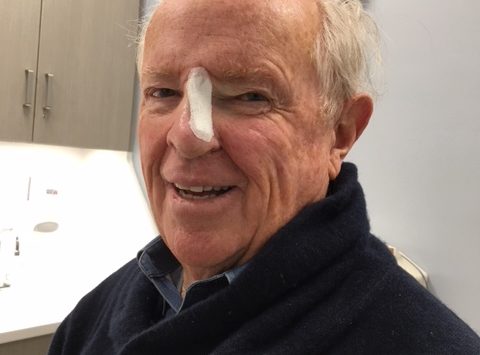 In books and movies, people are constantly being punched in the nose. In a long and eventful life, I have never been punched in the nose. Not once. Or anyplace else. Probably because I am a coward, thank God, and I haven’t missed it one bit. These are minor events in the movies (often followed by amusing application of raw steak to sore spot… jokes about black eye, walking into a door and so on). Rather worse in real life.

Yesterday, I got punched in the nose. OR… I had a “Moh’s” procedure (second one in 15 years), which amounts to the same thing. A very short, very able skin surgeon (my dear Desiree Ratner who helped me find Harry Lodge, all those years ago) gives you a shot so you don’t know what’s going on. And then calmly cuts away a pound or so of flesh from your nose.  Your nose! To dig the darned old cancer out. First they dig for a while, then they take the bloody flesh out into the kitchen in back (maybe a laboratory…I’m not allowed to look). They put the mush in a frying pan and check to see if they’ve dug down below the cancer. [Very Merchant of Venice]

You sit serenely while these tests are done, takes forever. Then the rueful doc comes back and says, “Didn’t quite get it all that trip. Let’s get back to it again. More shots, more rooting around on my precious nose.

Hate to admit it but it doesn’t hurt (while the shot lasts) but one does hear this unpleasant scraping noise, as they claw the flesh away at your face. Also, a disagreeable smell like burning flesh. It smells like burning flesh because it IS burning flesh. YOUR burning flesh. They are cheerfully cauterizing the wound so you won’t, you know, fill your shoes with blood. Also, a very dramatic black eye, a font of terrible jokes at my expense.

Anyhow, when they are done (six hours later), you are almost certainly cancer free (they have a 99% success rate) and you don’t smell any more.  Or I don’t think you do: they put crap up your nose to maintain its old shape so it’s hard to tell.

Not a great morning but SO much better than being, you know, dead. And I am nuts about Desiree Ratner. I wouldn’t exactly do this with her for fun, but I sure would do it to save my life. But once every 15  years is plenty often enough.

SO…while I cannot exercise (AT ALL)  for two weeks (!!), I am otherwise in the pink. Albeit a little scary looking with huge bandage, black eye… abrasions and contusions (I have cancelled all my social engagements).

Saddest loss, could not go to Washington today to see much loved Jen Sacheck, be invested as full, tenured Professor at George Washington Univ. Such a great woman…such a richly deserved honor. Such a wonderful friend. But the trip would have hurt. And I would have scared her children.

But a month from now? I will be ADORABLE! Wait and see. And, of course, I’ll live forever. Gotta love that. Chris