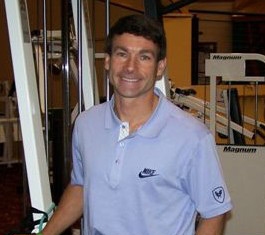 This handsome chap is Bill Fabrocini, one of the smartest and ablest physical therapists/trainers in the country. AND one of the co-authors of THINNER THIS YEAR, which we hope will be in book stores at the end of this month (you can pre-order on Amazon now). I’m prejudiced, of course, but I have worked very very closely with Bill – mostly on THINNER – for years now, and I think he is smarter about strength training, keeping your body working right all the way out and all the other key aspects of movement than anyone I’ve ever met. He is an intuitive healer …a category of which I am normally leery, but not in his case. He has deep technical knowledge AND a mysterious feel. It doesn’t get better than that. There is a new and critically better way to strength train; Bill knows it cold. I told his story for him in THINNER and It was exciting. Take a look.

By the way, Bill and I are hard at work on a set of strength training dvds (and downloads) which we hope to have available in December… January at the latest. Gonna be terrific, we think. Chris