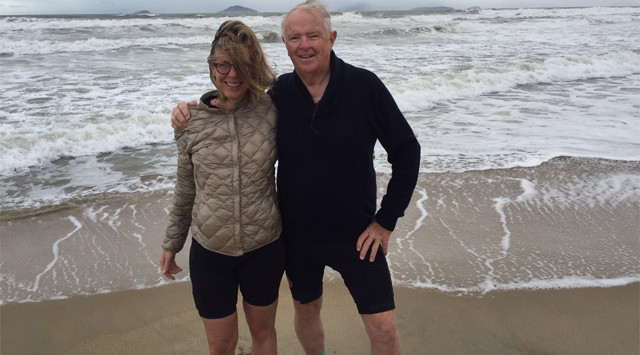 Hilary and I are just back from an unusual kedge/bike trip to Vietnam… a ten day trip (organized by Vermont Bicycle Tours) which we took with six, very close pals and a dozen strangers.  Pretty intense, pretty interesting… mostly very worthwhile. But a different bike trip. We are not talking Provence or Tuscany here. We are talking a tour of a “new” country which is astonishingly cordial to Americans. And (for us Americans) a trip into our own fairly recent past which is instructive but not always comfortable. Everyone in Vietnam was remarkably kind and welcoming. But, still, we had to take a look at ourselves (as of 50 years ago) in a very different mirror. And we did not always look great.

The exercise or “kedge” part was a pleasure, as always. We biked in the north (out of Hue and Hoi An) on modified mountain bikes (shock absorbers on the front wheels and very heavy tires) which made sense on very iffy roads. We got to go along the rice paddies and into little villages to which we would not have had access on road bikes. It was demanding, which we, of course, like. The distances were not huge but the bikes were heavy, the roads were bad … and it rained solidly all of one cold day. Hey… it’s an adventure. Three hours of that a day is a serious workout. As I say, we were six friends and a dozen more folks we didn’t know. One of the miracles of serious bike travel is that there is a certain “self-selection” at work and almost everyone we have biked with (on this trip and others over the years) has been good company. Not all as fit as we are (our group trained like crazy for this) but most could do it most of the time, and no one whined. We were from very different backgrounds and parts of the country which only made it better. Bike touring is a great kedge and a great idea. Butterfield and Robinson is still my favorite but VBT was very good indeed, especially the Vietnamese guides.

In the south (out of Saigon) the roads were better and we used fat-tired “combi” bikes, rather than mountain bikes, and they were appropriate. I turned up my nose at first, bike snob that I am, but I was wrong: they were just right for the terrain, and we had several serious biking days on ‘em.  Excellent. And the weather was warm. To tell the truth, the temperature got up to 95 a couple of days, which was also demanding. Hey, as I say…it’s an adventure!

I must say that the best thing about the trip was seeing the country and the people. The food was awfully good too, but the country and people were remarkable, for American travelers. The Vietnamese were amazingly warm and open with us, which I had heard about but was still surprised. Not to be too grim about it, but we did kill 3 million Vietnamese during the war. You could easily imagine their hating us. But there was not a whisper of that. They simply don’t feel that way. God knows why. The country seems to be thriving, especially in the south. It is a communist country, to be sure, but you would not particularly notice that on the streets which are humming with frantic traffic and very capitalist-looking businesses. There are serious war memorials all over, and all of them lost family and friends, as we learned.  But mostly they do not look back much… they are too busy getting on with their lives. And they are remarkably sunny about it. And about us.

There were some absolutely stunning sights (a night on a boat on Halong Bay in the north is as beautiful as it gets…think Catherine Deneuve in Indochine.) Hanoi, still the capital, is not as interesting or bustling as other parts. Danang, for example (where the first 5000 Marines landed, all those years ago) is on fire with development. And Saigon is absolutely booming. Ten million people, almost all on motorbikes and almost all tooling around town, it seems, all day and all night.  Frantic. They are SO over the war and SO into the next phases of their busy lives. These Fortnightlies are certainly not about politics but I have to say that one overwhelming feeling I (and others on our trip) had was to wonder: What in the world were we thinking, fifty years ago, when we ran this great war? How could we have thought it was our business how these busy, mostly happy people lived their lives. There is no Taliban, no Isis, and there never was. We just plain got it wrong, as former secretary of Defense MacNamarra admits in his book. Are there times when our country has to go to war over purely foreign threats? I think so. But the great lesson of a trip to this country is We be better be awfully damn sure of ourselves. A lot surer than we were in Iraq, say. Because it is terribly serious business. We had the great good luck to have only local, Vietnamese guides (most companies have a European leader backed by locals). These guides did not have absolutely perfect English, but they were beyond attentive…beyond competent… and about as nice, kind and thoughtful as you could possibly ask. We got to know them, they got to know some of us, and it was a privilege.

Vietnam is a very strange country for most Americans; having all-Vietnamese guides was a serious help. They know what they are talking about. And to talk to them about where they personally were (and their families) at various phases of the war and after…was a great advantage. Travel is broadening, as the fella says. Travel to Vietnam is very broadening indeed. Or at least it was for me. A good physical kedge, to be sure…but a great intellectual and moral kedge, too. It is a very long air plane trip, there and back, but it was worth it.