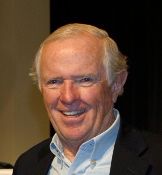 Had a wild and woolly night last night. Supposed to talk to some 200 doctors in Winston Salem, NC.

Go to airport, there’s a little fog. Quite a little fog. Several hours later, all flights that would have gotten me to the six p.m. talk have been cancelled. I am about to miss my first talk ever. Ugh. Offer the people who have been promoting this event for TEN MONTHS to try to do it by Skype. They say, Let’s. Big scramble… they happen to have a giant TV screen…we get hooked up and are “on air” at 6:15, thanks to pals at Eastern Harbor Media and splendid colleague, Ally Brito.

Decent public speaking is ALL about reading and communicating with the audience. But for this puppy I am standing in front of a big TV screen in an empty office on 17th St. On the screen is a ghostly reflection of my own face. And a one-inch-square repeat of the picture the audience is seeing in North Carolina. I look like Joe Biden after a heart attack. I have no idea what the audience looks like… can’t see a soul. Do hear ghostly laughter some of the time.

Enough to know audience is supportive. That makes it easier but it’s still a weird performance. Made much easier by Ally, who set up the whole thing and stayed to stand in for the audience.  Held up a sign to nervous speaker at one point: “Slow Down”. I tried.  When it was finally over, went out alone to fancy restaurant, Union Square, around the corner… ate and drank self into a tizzy (not Thinner This Year approved).

The nicest part: the sponsors simply couldn’t have been kinder. It is shockingly egotistical of me, but here is the note I just received from Jenny in Winston Salem. Apologies for ego but this was SO terrific.

“Chris: You were the real hero last night! We both lived to tell (and laugh) about it, though I did need a couple of stiff drinks after it was all said and done. Despite losing the feed here and there, you held their attention—at least one physician said “I wish we could hear from Chris every month!”, while others demanded “We must try again to have him here in the flesh.” Let me run some of these options up the flagpole and get back to you. Cheers, Jenny.”

Best “thank you” note I’ve ever had. Chris