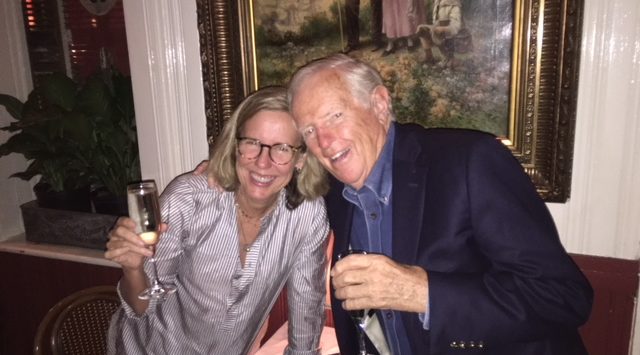 At the insistence of my (old) children, I am reluctantly working on a Memoir. I haven’t gotten far but it starts:

“I was born lucky. Then things got quite a lot better.”

There were several forks in the road where things “got quite a lot better” but nothing to touch August 1993 when I married Hilary. Mercy, what a great idea.

Last night we had dinner at the wonderful American Hotel in Sag Harbor, just the two of us. (Pals had given a lovely party for us in a cozy house in Sag Harbor the night before, but this was the actual anniversary.) And here’s the point: We had our very first dinner together in that room, 26 years ago. And our second in the same place the next night. 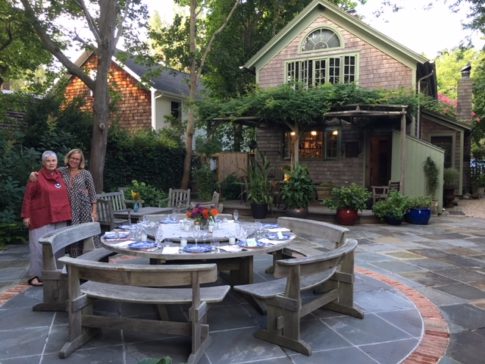 I am a lawyer and a naturally cautious man. So I waited until the second night to ask her to marry me. She was horrified (we barely knew each other) and pointed out that she was already married at the time. I said that was a technicality. And so it turned out. Two weeks later, she had a separation agreement, and the two of us moved to Aspen where we lived for the next five years. The best – and fastest – decisions I ever made.

A couple of years later, there was the only serious bump in our road: she fell down some horrible stairs in a big Victorian house in Denver, where she was doing a portrait. I was up in Aspen, four hours away. I got a call at two in the morning from a rushed surgeon who gave a blunt report… said she was having a major operation that morning and there was a serious risk she would die; she would certainly be quadriplegic. Oh. I was told to get someone to drive me down, as I’d be too upset to drive myself. But of course there was no one around at that time of night. I dressed carefully in a jacket and tie (so the doctors would pay a little more attention), including the tie I wore at our wedding. For luck.

They had already wheeled her into the operating room when I finally arrived but they brought her out again, to say good bye or whatever. She looked like hell and had something that looked like ice tongs sticking into her head. They had given her some terrible warnings about how she might turn out, if she lived. She repeated all that to me, in tears.

A couple of years before, I had told her that – because of the huge age difference – she might have to make some hard decisions about me. Some people, I said, did not want to live, after they had become too old and sick and stupid to be any use. Not me, I said. I wanted to stay as long as I had one flipper to paddle myself around the petrie dish.

She was in fact one in a thousand to walk, after such an injury (her X-rays are in medical books), something we think about with deep gratitude every single day. She was able to walk, after two months, and we settled down to the serious business of Living Happily Ever After. Which is precisely what we have done. Lucky, man! Very, very lucky.