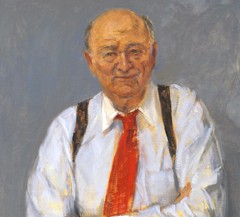 Mayor Ed Koch died last week. He was a terrific exemplar – it seems to me – of the kind of life we talk about in THINNER and YOUNGER. He worked out almost every day of his life (I used to work out beside him in a gym at a hotel near the World Trade Center in the 1970’s…a surprising tall guy who “went for it” every day). He was a good mayor for three terms but it was his life after that which impresses me. He lived life at speed, all the way out… writing, commenting on everything, being there. In the last days of his life he was writing thoughtful pieces on gun control… other issues of the day. “How am I doing?” he used to say all the time. The answer at the end: Not bad. Not bad at all. Terrific in fact.

My wife, Hilary Cooper, spent a few days creating this portrait in his office at Bryan Cave. It lives at the Museum of the City of New York.