I learned two days ago that Durgin Park – the iconic Boston restaurant which has been open since 1826 (sic) and to which I have been going for seventy years – is about to close.

It is a rough place, originally designed to serve the butchers, fishermen and other purveyors, back when this was Scollay Square and a very rough neighborhood indeed. The long, pine tables were (and are)

communal, you took your company as it came. There were not that many Harvard men among them, but some. The waitresses were reputed to be graduates of the surrounding streets and they brooked very little nonsense. The slabs of roast beef and the lobsters were huge, and the onion rings unmatched.  The vegetables were apt to be canned; one did not come for the vegetables. The Indian pudding (see pic) is inedible to strangers but superb for us natives. Despite its roughness, it was one of the best restaurants in Boston. Still is, to my taste.

In my Harvard days, I remember coming here once with a gang, after a close Dartmouth game. Eventually, there was a great deal of singing and I was the leader of one group.  A rival (Dartmouth) group set up counter songs. The only detail I retain was me and a pretty girl from the other group standing up on a big table and singing Hava Nageela! together, along with the fight songs. I ask you. How great a restaurant is that? Once, in the 1970’s, my sons Chris and Tim and some others came in at Christmas and tried to sing some carols. They were promptly thrown out. Just right.

Another time, I dragged my very dignified and much older law-firm mentor here, a lovely man named S. Hazard Gillespie. We had the General Counsel for General Mills with us. The waitress – a sturdy, willful woman of a certain age – took an passionate shine to Hazard (a handsome and charming man – imperially slim and impeccably tailored; he was not used to such places or such women). He had ordered the roast beef and she insisted on cutting it up for him while he – endlessly and hopelessly polite – begged her not to. He patted at her hands, uselessly, to get her to stop. This from a man who has made grown men cry with his cross examinations. She almost fed him. She did not follow him home, but she would have with a little encouragement. The general counsel howled with pleasure at his discomfiture. Me too. 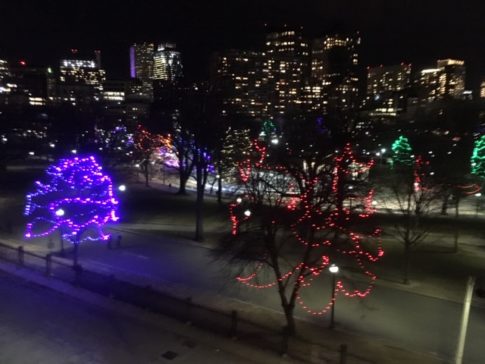 When I heard the dark news of the closing, I called a nephew and his wife to get them to come with me for a last meal. (I tried to get my 92 year old sister to fly up from Baltimore but no luck, the sissy. I tried another graduate of these tables who now lives in Denver. For some reason he wouldn’t either, and he has his own plane, the lout.) Undaunted, I drove in from the Berkshires to my room in an elegant club on Boston Common (see pic)…about as far removed from Durgin Park as one can get on this earth. My nephew, Davis Farmer, and his wife Sukey and I  met at the restaurant at six (the crowds were such that – if Davis and Sukey had not gotten there at 5;30, we would not have gotten in at all.) When the doors opened that very morning at 9;30, there were already lines around the block, honest. We slid in easily, for some reason and tucked in with traditional relish. We had lots of drinks, a huge lobster (for me)..slabs of roast beef  (for them) and excellent Indian pudding for all of us. Then more drinks. It was a joy and I am astounded that new owners (from New  York, don’t you know) are still going to close. Buffoons!

And this despite my heroic ride in from the Berkshire hills.  Anyhow, it won’t be my fault. And my lovely past there is more deeply enshrined.

By the way, I am from Salem, and my forebears were around during the witch trials. None of my relatives were caught, luckily. But those New York owners may want to keep their eyes out for little signs of bad luck. Hexes and such, the black-guards.